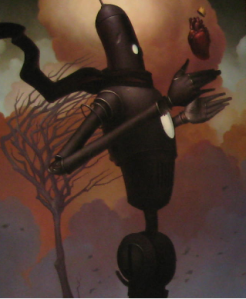 "The Deference Engine" by Brian Despain

My friends Suzanne and Angie organized lunch and a gallery visit today. We visited Roq la Rue in Seattle’s Belltown neighborhood. This gallery has always delivered; it’s the place to check out alternative contemporary, pop surrealism, and low-brow gothic art.

I hadn’t visited for a long time and the new exhibit featuring the work of Brian Despain and Mia Araujo was a great reason to get back to Roq la Rue.

The humanoid robots in Despain’s paintings, drawings, and sculptures exude a lot of emotions. They are sweet and evoke a smile, but they are set in a moody, dark world that is slightly unsettling.

The fine brushstrokes and realistic backdrops in his paintings could belong in a Renaissance portrait of a royal family member. To contrast that with the image of a robot is delightful. It’s deeper than a mere juxtaposition would suggest and I found myself looking at the pieces for a long time.

Also intriguing are the paintings of Araujo. Their style might be described as gothic-meets-Pre-Raphaelite. The subjects are elegant women, but the remainder of the spaces are filled with hidden symbols and imagery: skulls, candles, machines, tigers, and such.

Araujo borrows themes from mythology and literature and creates a haunting world in her paintings. It’s as though the entire contents of the subjects’ minds are displayed visually on the canvas. Normally, I revel in negative space, and there isn’t any in Araujo’s work; however, the pieces are captivating and they drew me in nonetheless.

The show runs through March 5, 2011. If you have a chance, go see it. If you don’t, be sure to visit the artists’ websites and visit Roq La Rue another time. They won’t disappoint.