It’s possible I’ve been living under a rock for the past two years.  Florence Welsh has been on the music scene since 2007 and released her first album over two years ago. However, I didn’t know about her until she was on Saturday Night Live in November 2010. I have some catching up to do. 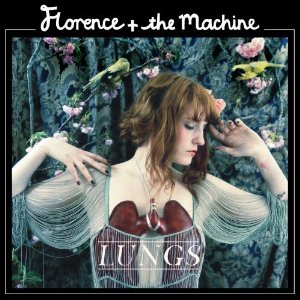 Florence + The Machine was nominated for a Best New Artist Grammy for this year’s Grammy’s. The new part of that award title makes me feel a little less bad for my under-rock living. For mainstream America, she’s new.

Florence Welch is an original, but I can’t help comparing her sound to Annie Lennox—maybe it’s the redhead Brit coolness thing, but I do think there are similarities between the two artists. I sometimes think of Kate Bush when I hear Welch sing.

I finally bought the CD Lungs. I can’t get Dog Days Are Over out of my head. It’s a really catchy song and showcases Welch’s amazing voice. The instruments are great too. Percussions, strings, some sort of mandolin-type instrument. Or maybe it’s a harp. Hey, I’m not a music writer! I just know what I like—even if I don’t have the words to explain why or what.

Between Two Lungs is a slower, hypnotic song but it’s also catchy. It also includes a unique assortment of percussion instruments. Welsh has a voice that carries the song. She could put out an a cappella album and you’d never miss the instruments.

All the tracks on the CD are great. It’s brilliant stuff! Check it out. It will take your breath away.

One response to “Florence + The Machine”